Tuesday night I went to a Pink Martini concert at The Town Hall. For those of you who don't know the band, the group is made up of a brilliant duo (literally, Harvard grads) female singer and male piano player, and a twelve piece orchestra. When they all come together, the sound is extremely unique and super fun to listen to.

I have to admit that I'd never been to one of their concerts, but I've spoken to people who had and figured I knew what to expect: Thomas Lauderdale, the pianist, and China Forbes, the vocalist, center stage with the rest of the orchestra backing them up as they play through their many hits.

Well, Tuesday night seemed to be everything but the expected. Unfortunately China is recovering from throat surgery, so a guest vocalist named Storm Large was filling in for the night. This didn't seem that out of the ordinary. A minor disappointment, maybe, but Storm had a beautiful voice and was a riot on stage. After the first few songs though, Thomas introduced another guest singer, Ari Shapiro. That's right, NPR's White House Correspondent. At first I thought it was a joke, but you can imagine my shock when Ari himself appeared on stage to sing. And sing he did!

The rest of the evening was just one surprise after the next. Following Ari's performance was Soari Yuki, apparently considered the "Barbara Streisand of Japan." Then came a drag queen who sang Santa Baby, accompanied by Paper Magazine editor, Kim Hastreiter on percussion. After them a Jewish Cantor came out to sing, followed by Basil Twist the puppeteer who danced his marionette as Thomas played Claire de Lune on the piano. For their final song the entire motley crew came out to perform, which had everybody in the audience on their feet.

And if the night's unexpected guests weren't enough, Thoman Lauderdale, Storm Large, Ari Shapiro, Soari Yuki and the cantor all came out to sign autographs after the show. Obviously, the paparazzi and camera crews were all over that. The whole night was utterly bizarre but an unbelievable amount of fun. 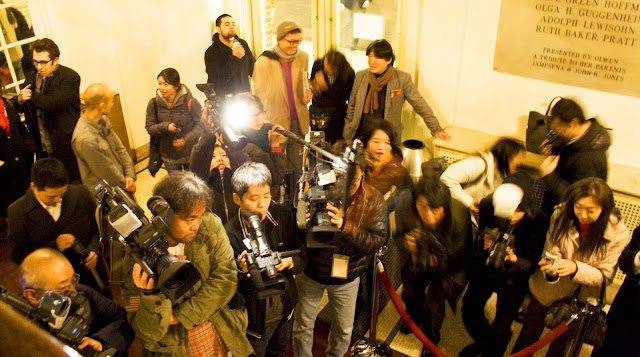 Don't forget today's the last day to enter the giveaway.
The winner will be announced Friday!

Email ThisBlogThis!Share to TwitterShare to FacebookShare to Pinterest
Labels: NYC and TRAVEL